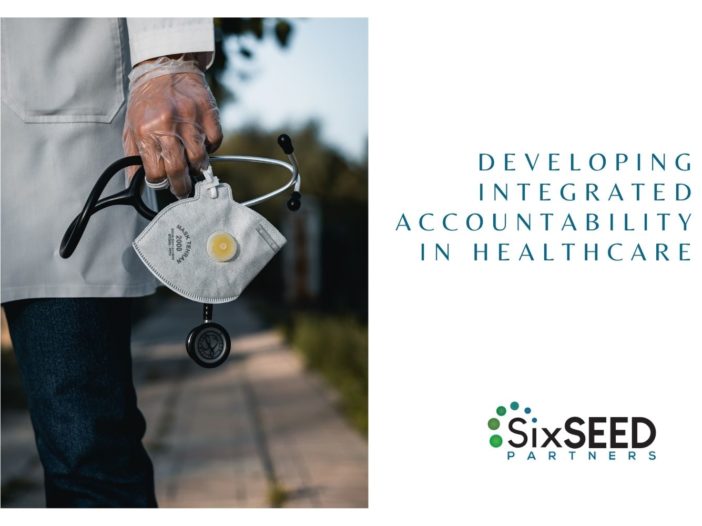 SixSEED Partners (SSP) was engaged by a senior health system leader to complete a 360-degree feedback process in support of the client’s ongoing systemic leadership and development.  This leader was brought into the health system to integrate service line leadership from a decentralized and competitive model to a more centralized and collaborative model.  The Leadership Circle 360 Profile (LCP) was administered after the client had been in the system for a year.

The client had previously completed the LCP at another system so we were curious to see if the themes would be any different from his prior results.  In reviewing the results from 32 respondents, the client’s attention went to two variables:  there continued to be a theme of his strength in relationships and in his overdoing that strength with complying behaviors (for detail, see The Leadership Circle Website).  This leader’s development opportunity was courageous authenticity and achieving results and decisiveness—dimensions well known to him.

However, his greatest concern was that the ratings from his direct reports was drastically different (lower) than other stakeholder groups.

As we explored internal and external dynamics, we found support in the theoretical frameworks of the Empowerment Dynamic, and Polarity Thinking which correlate perfectly with the LCP framework of reactive and creative modes of energy management.  Through coaching and much reflection, the client was able to see how his direct reports were placing him in a rescuer (hero) role and were presenting themselves as victims to system leaders, mainly hospital Presidents who were perceived as villains (see graphic).  This dynamic was evident through numerous cultural stories in the organization—not only did this dynamic occur within his organization:  it was prevalent throughout the system, with a displacement of accountability to “higher ups,” which was also convenient when something didn’t work.  Blame was a well -known song sung throughout the system.

From the client’s perspective, he was able to see that he was re-enacting that dynamic with his boss and part of his development was to be conscious of the roles he was playing and putting on others.  He started individual meetings with his direct reports and shared the distinctions between victim and creator, encouraging them to take ownership and identify actions they can take to influence what they wanted to create in the system.

The client was also challenged to lead a system-level leadership development effort where both/and thinking (polarity thinking) would be introduced and measured for the prevalent tensions of Centralization and Decentralization (system service lines AND local hospital entities) and Individual AND Team accountabilities.  In this way, he would broaden the leadership capacity of system leaders which would minimize the victim/persecutor conversations and support mutual accountability throughout the system.

Are victim/ persecutor conversations rampant in your organization?  Are you fatigued in having to spend time on these draining discussions that result in stagnation and energy drain?  We feel your pain!  Contact us to learn how you can lead sustainable, empowering change in your system!

This site uses Akismet to reduce spam. Learn how your comment data is processed.

“Life does not accommodate you; it shatters you. Every seed destroys its container, or else there would be no fruition.”  —Florida Scott-Maxwell